How to Make Quilling Paper Squares 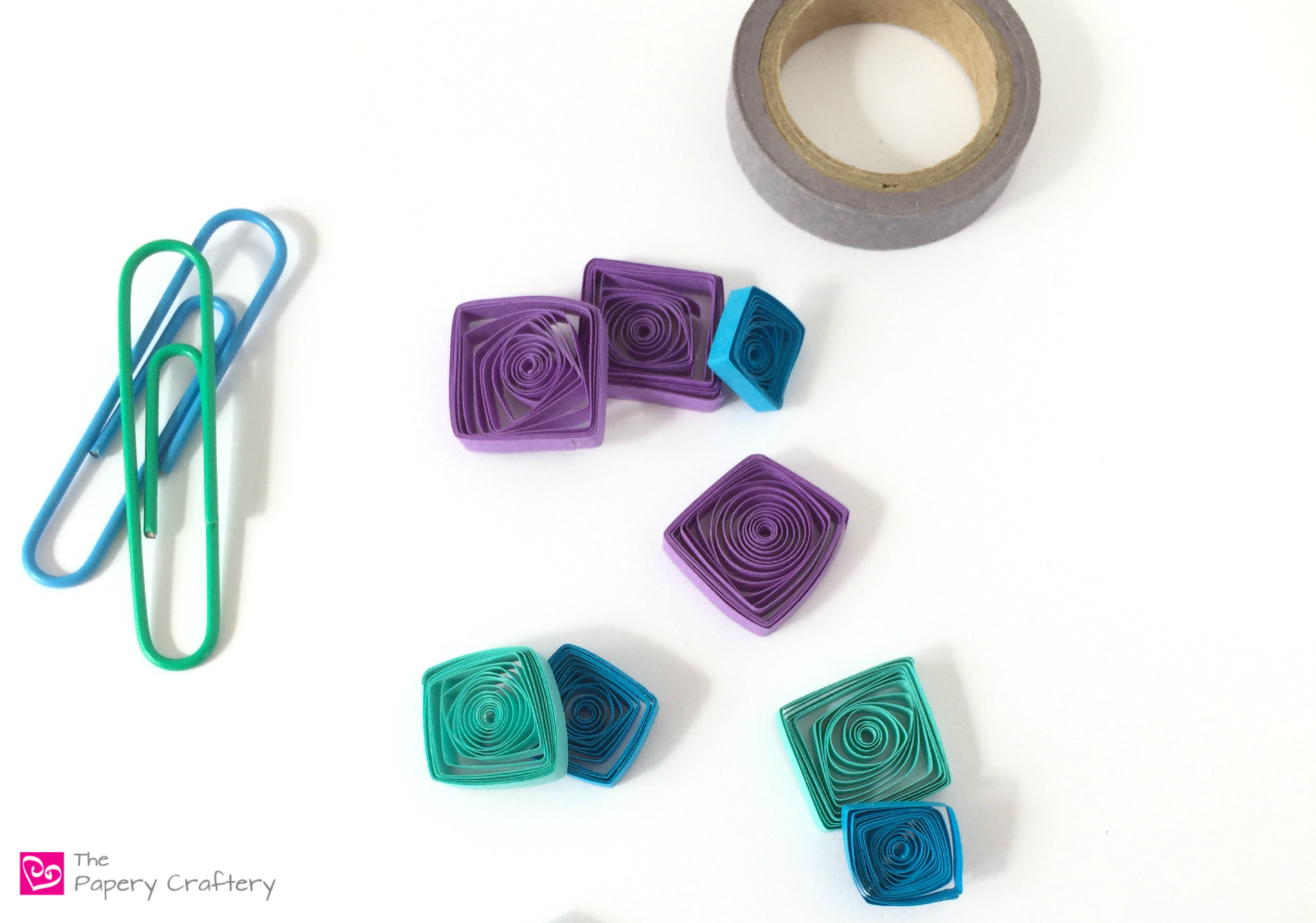 So far, in this quilling for beginners series, we’ve tackled basic coils and curvy shapes, such as teardrops and marquise.

Let’s now move on to another part of quilling: how to make paper squares and other angular shapes.

But first, grab your copy of my quilling paper shapes printable so you can follow along!

Now, to be perfectly honest, these shapes are not something I use in my quilling work very often.

I don’t have a real reason. I’ve just always been drawn to circles and swirls!

Nevertheless, quilling paper squares are an important skill to master, especially if you’re looking to be a accredited member of an quilling organization, like the North American Quilling Guild.

To start all the following shapes, you’ll first want to roll loose coils.

A quilling paper square is formed by pinching either side of the coil in an even way.

Rotate the pinched coil 90 degrees to pinch the other 2 sides, keeping an consistent space between all angles.

Keep the shape as is and its a diamond. Or, spread the outer layers of paper out to create a square.

To make a rectangle, simply adjust the spacing between the pinched sides so they are not so evenly spaced all around.

A quilling paper triangle is created by pinching 3 sides of a coil.

From a loose coil, gently squeeze one side, then spin and pinch in two more places. All types of triangles would be made the same way.

Another common angular shape is the arrow.

The arrow is similar to a triangle because it has 3 angles.

Start with a strong squeeze on one side. Rotate 90 degrees and make 2 smaller pinches, close together, on the other side.
Bend the end with the 2 close angles around your quilling tool to create the peaked effect.

The angled marquise also starts with a deep squeeze on one end of a loose coil.

Rotate and make a slightly gentler pinch on the opposite end.
Next, spin your shape so the first 2 pinches are top and bottom. Using both hands at the same time, make 2 more small pinches on either side of the last angle.

The last quilling paper shape for now is the bunny ear.

A bunny ear is a loose coil with 2 small pinches next to each other on one end. I think this one looks more like a cat, but that might just be me. Slightly deeper squeezes are also traditional on the bunny ear.

Note: there is a variation on the bunny ear called the lily of the valley. For this, bend the two peaks out away from the coil slightly.

There are a few more obscure quilling shapes: maybe I’ll share them too one day.

Keep an eye out for future posts on making paper scrolls and swirls!

But, for now, keep on quilling!

An art school grad and self-taught quiller, I'm the hands and brain behind The Papery Craftery site and shop. I love finding new papercraft techniques and artists!

Hi there! I’m Meredith, art school grad and mama of two awesome and incredibly energetic littles. I fell across paper quilling by chance and fell in love with all the amazing things paper can do! Follow along as I roll tiny quilling creations and I promise I’ll teach you everything I know!

Featured Video
What are you looking for?
Affiliate Disclosure

Some posts on this blog contain affiliate links.

If you click on the links and make a purchase, I would receive a small compensation to help me finance this site and keep coming up with awesome tutorials and tips! There's no cost to you and I only ever include links to companies and products that I trust and work with on a regular basis.

All posts with affiliate links are clearly marked.

The Papery Craftery blog is a participant in the Amazon Services LLC Associates Program, an affiliate advertising program designed to provide a means for us to earn fees by linking to Amazon.com and affiliated sites.

Show your support to The Papery Craftery

I hope you're inspired by my quilling!

Feel free to use my designs as gifts or for your own personal use.

And I'd love any sharing of my photos and projects!

All I ask is that all photos remain unaltered and link back to the original post, and please do not attempt to sell my any quilling created from my designs as your own work.

Social
Check Out CreativeLive's Free On-Air Classes
We use cookies to ensure that we give you the best experience on our website. If you continue to use this site we will assume that you are happy with it.OkRead more